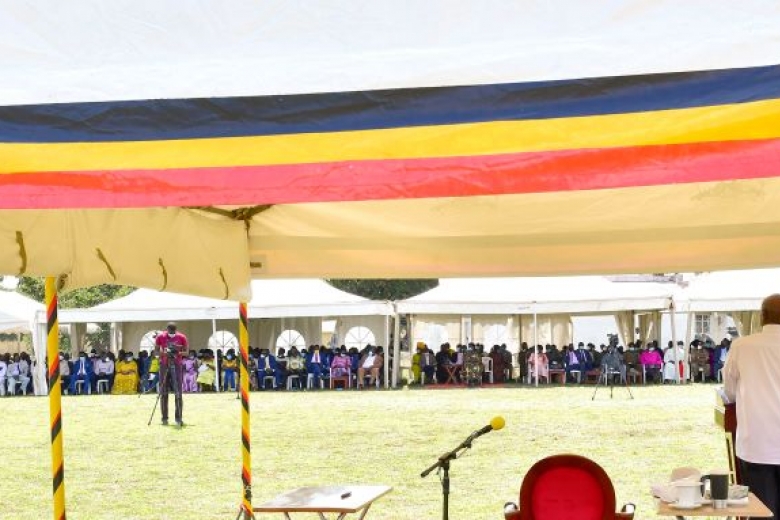 President Yoweri Museveni who has spent his fifth day in pursuit of peace in Eastern and Northern region following the re-emergence of cattle rustling is taking drastic measures to handle the crime that is mutating daily and threatening to wipe out gains made in security and development in the 9 districts of Karamoja and the neighbouring Eastern and Northern regions.

“It seems that the ghost of stealing has remained with the Karimojong. We are changing the commanders in the area because I think some have been colluding with the rustlers to heighten the problem,” he said.

During the security briefing ahead of the meeting with the Acholi and Lango leaders, President Museveni was informed that the cattle rustling had turned commercial with rustlers collaborating with other actors including security operatives to sell animals that have been rustled. The issue of cattle thefts, especially in Acholi region was also on the rise, and according to reports, the Police canine unit has been vital in fighting the vice but is limited.

“”Whether day or night, we are going to end this cattle rustling. There is something the Police has not exploited, the canine unit for cattle thefts. I can see why some government programmes don’t perform. When seniors don’t supervise, what do you expect,” he said referring to reports that the region has only one canine unit and that requests to Police headquarters to beef it up have remained unanswered.

President Museveni later announced various stringent measures designed to end, once and for all, the indiscipline of cattle rustling in the country including installing more CCTV cameras at choke points including at Karuma, Paara and Masindi Port Ferry to monitor cows being moved from the North to the South and in the region and the use of digital markings of all vehicles that will be centrally monitored.

“I can assure you that by combining these ancient and modern methods, we are going to end cattle rustling. A cattle rustler will see a gun but not touch it,” he vowed.

President Museveni who has been on a fact-finding mission and assessment of the security situation in the districts bordering Karamoja region affected by the cattle rustling was yesterday meeting leaders of Lango and Acholi sub regions at Baralege State Lodge in Otuke County - Otuke district.

Those in attendance included the Vice President Rtd. Major Jessica Alupo and the Secretary General of NRM Hon. Richard Todwong.

Others were cabinet ministers from the 2 regions of Lango and Acholi, Members of Parliament, RDCs and RCCs and Religious leaders among others.

President Museveni said the measures will allow soldiers who are in operations to apprehend wrong characters found in possession of firearms, bows and arrows, sticks for driving the animals or those suspected to be involved in cattle rustling. He said the use of police canines would also be intensified.

President Museveni urged Ugandans to cultivate a culture of peace for economic transformation.

President Museveni who welcomed the leaders to his home in Baralege and told them the history of his occupation of the area also used the same occasion to mobilize leaders to sensitize their people on how to eradicate poverty through modern calculated commercial agriculture.

He said leaders must use the vast experience they have of what is happening around the world to wake up their people to abandon subsistence agriculture in favor of modern commercial and calculated farming.

The President stressed the need to guide wanainchi on proper enterprise selection in relation to land holding per family, strongly recommending intensive agriculture for those with 4 acres of land.

“We strongly recommend coffee because of its global demand which is still growing, fruits, diary cows, poultry, piggery and fish farming at the periphery of the swamps. Do not grow rice in the middle of the swamps because we need the water,” he said.

Museveni said that families with huge chunks of land can go in for extensive farming especially for crops like cotton, maize and sugar cane among others.

The President at this juncture invited leaders from the region to visit his demonstration farm at Baralege and convey the message from the farm to people in their areas that will help them get out of poverty.

“Leaders must see for the people. You have a vast experience of what is happening in the world like Europe that changed through agricultural revolution,” he said.

Commenting on the concerns raised by the leaders of the 2 sub-regions of Lango and Acholi, President Museveni noted that all the socio-economic requests by leaders require funds adding that with proper budgeting in Parliament and prioritization of programs, all those needs would gradually be met including infrastructure development, power extension, hospital expansion, school enrollment etc as not all of them can be fulfilled at once.

“We can not solve everything at once. Many of the issues raised here are issues that need money. Many of you know the budget, you should know that everything you talk about needs money. Listen to my advice on budgeting. When you listen to my advice, achievements are made,” he said.

On the issue of the Akii Bua Stadium, President Museveni pledged the prioritization of Akii Bua and Muhinga National Stadiums to promote sports.

“We need at least those two; Akii Bua and Muhinga incase of competitions. We have only Nambole,” he said.

On the issue of the Apaa land conflict, President Museveni urged leaders not to be misleaders.

“The issue of Apaa will be decided by the colonial maps which are available. We agreed on a judicial commission of inquiry which I will appoint soon. I will work overnight on this. It is not good for leaders to be misleaders. This issue will be solved,” he said.

The Vice President Rtd. Major Jessica Alupo once again thanked President Museveni for the peace and security prevailing in the country that has enabled wanainchi to carry out their duties normally.