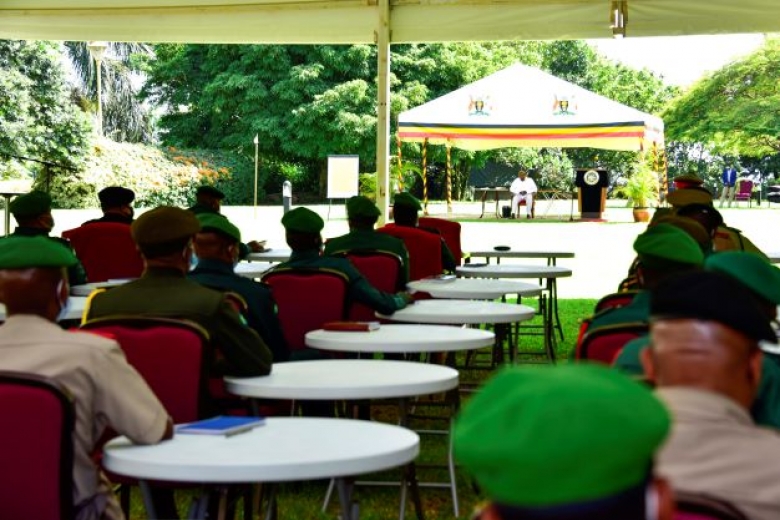 President Yoweri Museveni has said that in order for the region to deal with emerging security threats, it must strengthen its economies and empower its people.

“You cannot deal with security threats unless you also deal with the economy. The economy must be strong,” he said.

The President was giving an opportunity lecture to a delegation from the Command and Staff College Duluti, Arusha, Tanzania. The team comprises 48 participants among them, 11 Sponsor Directing Staff (DS) and 34 students. The participants are from 09 different countries including Tanzania, Burundi, Kenya, Bangladesh, Kingdom of Eswatini, Egypt, Malawi, Mozambique and Zimbabwe.

The President gave the delegation a brief history of Uganda’s liberation story and urged them to borrow a leaf.

"We took a holistic picture and you must have known that Uganda had become a failed state just like Somalia and other failed States. And the security situation was very bad that's why there were so many refugees from Uganda.  By 1986, we had more than half a million Ugandans as refugees in South Sudan and in Congo. However, the situation was reversed,” he said.

The President cautioned against the issue of promoting identity including that of religion, tribe and gender as opposed to interests.

The fragmentation was on the question of emphasizing identity of tribe, religion and gender instead of interests.

President Museveni said it is important to ensure that people live a prosperous life in a modern way by having enough food, clothing, good houses, good education, good health, etc.

“In order to do that you need money. And to get money you need to engage in the production of goods and services. If you don't get money through production, the alternative is to beg for money from other people,” he said.

President Museveni said Uganda had a big problem of subsistence farming where people would produce for ‘eating’ and forget about production for the ‘pocket’ money.

“Where I come from, they are cattle keepers. They produce milk, beef and matooke. They cannot sell their products to themselves since they produce similar items. This presents the first wealth creation principle of patriotism. This gives them room to sell their products to the people in Kampala and other parts of the Country. Then the money they get they use it to buy other items they need like clothes from Kampala and other regions in Uganda,” he said.

The President said with surplus production comes the principle of Pan-Africanism where surplus goods are sold to other countries.

He said the third principle is socio-economic transformation.

“Here Africans are tasked to run away from staying in grass thatched houses, and stop using "muscle power". This is done through sensitizing them on how to change to modern agro-production,” he said.

On the Principle of democracy, the President said this allows all political parties to get involved in free and fair elections and by doing so, a political leader will serve the people and there will be unity and prosperity for all since they look for votes from all people irrespective of their identity.

The team leader and College Commandant Brig Gen SD Ghuliku said their tour is under the theme; “Regional Blocs combined combat readiness to handle emerging security threats” and they selected Uganda as their case study.

Brig Gen SD Ghuliku said the wisdom imparted in them will go a long way in helping them during their  military career and in retirement.

The delegation later presented gifts to President Museveni as a sign of appreciation for the warm welcome to Uganda.