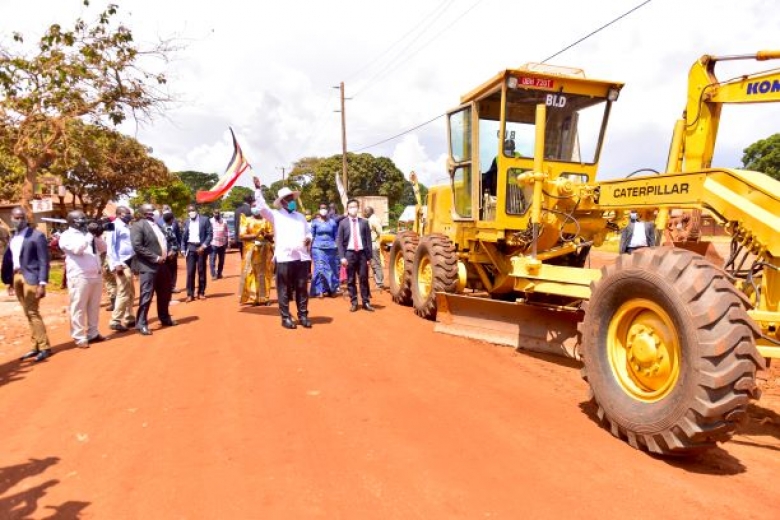 President Museveni has commended the people of Busabala for freely offering their land to government to pave way for the construction of the Busabala-Najjanankumbi road, saying that they have exhibited a true spirit of patriotism that other Ugandans should emulate.

“I know that some people here are poor, but it is not good to put the government on pressure by delaying the development projects because of compensation. We will still pay those people who gave their land freely but without pressure. I will go and tell the people of Uganda that I have met patriotic people in Busabala,” he said.

The President was speaking shortly after performing the groundbreaking ceremony of the 11km Najjanankumbi- Busabala road project in Busabala.

He noted that with the construction of the new road, institutions like Kaazi Scouts National Camping Ground would be able to easily access the road and organize international events.

“We got embarrassed a few years ago when the scouts of the whole world came and used this road, but I am happy that when they come back, they will find a good tarmacked road,” he said.

To the fishing community of Busabala, President Museveni cautioned them to utilize the road to carry their fish produce to the market as opposed to only using the road to carry gossip which is not developmental.

He informed them that government was in the process of putting surveillance equipment on the lakes to deal with illegal fishing and monitor the lake activities.

He said that government would also give them legal boats of 28 feet and nets that would help in making their fishing business operations safer and more lucrative.

President Museveni re-echoed the need for fish farmers to desist from bad fishing habits such as catching young fish and encouraged them to be patient enough, to allow for the fish to grow into marketable produce.

“You betrayed the fish industry by catching and eating young fish. You should be like us the pastoralists. Even if we are hungry for meat, we cannot eat a calf. I put soldiers on the lake because you failed to control yourselves.  They told me that fish maws and mature Nile Perch are back which are very lucrative and will boost trade. It is my desire to give you control over the lake after campaigns,” the President said.

The Minister for Works and Transport Gen. Katumba Wamala noted that the road project will not only ease transport but that it would also help in employing the local youths in the areas of building and catering services. He added that it was to this effect that he had tasked the locals in the area to form groups that would be able to gain from the forthcoming project.

In her brief remarks, the Executive Director of UNRA, Allen Kagina said that the project had other components such as building four vehicle lanes over passes and pedestrian bridges which would help to reduce recurring road accidents at Entebbe- Najjanankumbi road.

She was happy to note that since the NRM government took over in 1986, over 4792 km of paved roads have been constructed and that UNRA on average is now doing about 400km of paved road per year.