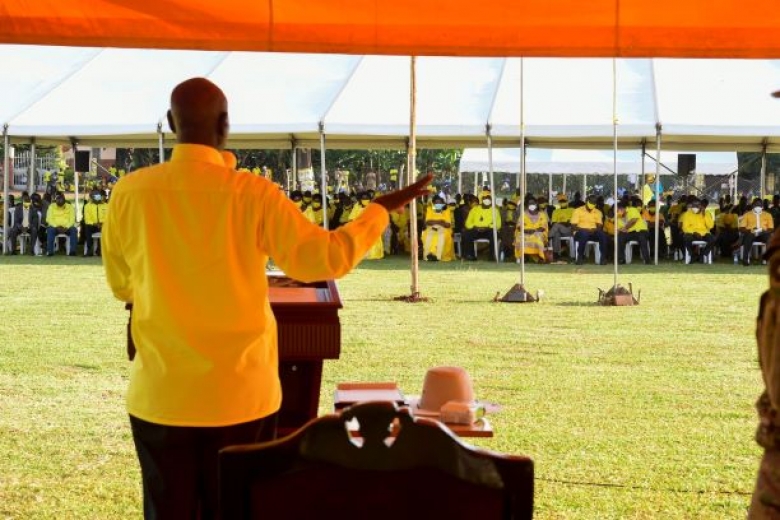 President Yoweri Museveni has been highly commended for the scientific approach of the campaigns in a bid to control the spread of the deadly COVID-19 pandemic and saving the lives of Ugandans.

The appreciation was contained in the memorundum by leaders of Budaka, Butaleja, Tororo and Tororo County read by the Chairman of Bukedi Parliamentary Caucus who is also the Minister for East African Affairs Mr. Julius Maganda at the meeting with Candidate Museveni at Elgon View Primary School ground in Tororo Municipality.

The leaders also thanked President Museveni for the state of the art new Market he had just commissioned as well as other development programs pledged in 2016 that have been fulfilled.

In the same meeting the LC1 chairperson of Senior-quarters Tororo Mr. Gerald Omaset, while welcoming Candidate Museveni to his area assured the NRM flag bearer of 90% win because all his residents are NRM supporters.

President Yoweri Museveni who is also the NRM Presidential flag bearer in his address encouraged NRM leaders from Greater Bukedi to to unite the people by addressing their needs other than focusing on their identity including tribes, religion, etc

He told them that it was the wrong ideology of identity that the tribal leaders concentrated on that created disunity among the people and led to their weakness in the past.

He added that even after independence, the young leaders who took over from the colonialists were not prepared and also prioritised  identity instead of finding out peoples’ needs and interests.

President Museveni said NRM rejected that line of thinking and embraced the unification of the masses politically and socially by taking care of their needs.

He said this in turn enabled NRM to build a strong army leading to the urshering in of peace in Uganda and a great investment environment.

President Museveni informed the leaders who were listening attentively to his address that with peace, many investors have came to Uganda to open up industries and companies that are now contributing a lot in the building of the economy by paying taxes.

The President added that all the infrastructure in the greater Bukedi sub-region is now being developed using the funds accrued from the taxes paid by investors.

He therefore called for proper budgeting of funds by members of parliament in-order to accomplish the task of fulfilling the needs of the people.

President Museveni urged leaders to spear head the program of wealth creation where Ugandans must all get involved in modern ‘calculated’ commercial agriculture for both food and financial security.

He added that NRM is also emphasizing on the integration of East Africa and Africa for a bigger market for our goods that will lead to our prosperity.

The Regional NRM Vice Chairperson Captain Mike Mukula took the delegates through the unstable political history of pre and post Uganda Independence until 1986 when NRM under the leadership of President Yoweri Museveni came on board and has been working tirelessly hard to correct the mistakes of the past leaders.

He urged them to solidly support  Candidate Museveni and all NRM flag bearers in the coming elections.

During the liberation struggle to end Idi Amin’s regime, it was in his house where the President narrowly survived death and escaped to Nashibisho forest after Idi Amin’s soldiers’ ambushed him during a meeting in the house.