“Floods cannot be a way of life in Kasese,” President Museveni 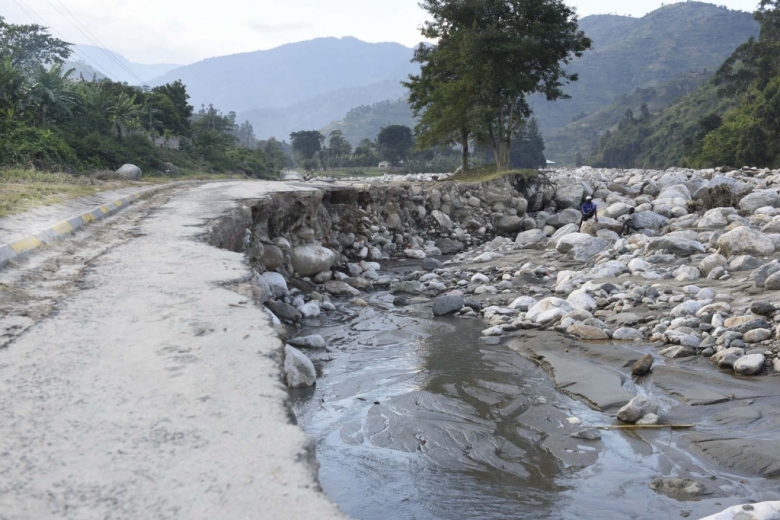 President Yoweri Museveni has said leaders must agree on the way forward on the issue of floods in Kasese without cheap politics or deceiving people but using facts to find a solution.

“We may not solve this in one day, but we must agree on the way forward without cheap politics or deceiving people, just facts. We have come in response to the alarm you made. We shall look after the displaced people and support them. But this cannot be a way of life,” he said.

The President today made an on-spot visit to Kilembe Mines Hospital that was razed down by double flash floods, which destroyed communities and brought the district to its knees.

Last week destructive flooding as a result of simultaneous bursting of five main rivers of Lhubiriha, Mubuku, Nyamwamba, Nyamugasani and Sebwe wrecked havoc on the district, sweeping away several schools, bridges, roads and health facilities and depositing sand and huge boulders that crashed everything in its way. Over 46,339 people are affected.

The President later addressed various district leaders at the Kasese District headquarters and apologized to the people of Kasese who he said had stopped to greet him but he could not stop.

“When I was coming, people wanted me to stop and greet them. Ugandans think things are normal but this disease is dangerous. In other countries, there are piles of coffins, here because of the actions we took and God, we have no death. Am glad people are wearing masks. Its not comfortable, but medicine is not comfortable,” he said.

People had lined up on the streets to greet the President as he made his way to Kilembe but he only waved back.

“On behalf of the central government, I came to say sorry for what happened here and for the suffering. Some years ago we had the same problem. We came here and worked out a rehabilitation plan. I was told bridges were built, even an embankment to hold the water. Now this water has come and washed away the bridges and the roads. It bypassed the wall and caused more damage,” he said.

The President said he has written to the Minister of Water and that of the Environment to study what the source of the problem is so that a permanent solution is got.

“My suspicion…God created gravity. You can’t go up and stay there, you must go down. We must deal with the issue of human settlement, some of these hills you see are not for human settlement,” he said.

Using an example of a woman winnowing millet, The President said when a woman winnows millet, the gravity brings the millet down and the wind blows the chaff off. “Lets use the same science. Lets plant trees on mountaintops. The best way of settling people is encouraging them to engage in commercial agriculture. The question is where and how. They should also engage in the services sector (Shops, tourism, hotels, taxis etc), Industrialization and ICT,” he said.

The President urged leaders to normally see ahead of the people they lead and talk to them saying they must have a correct reconstruction plan.

“At first people did not understand the capacity of the NRM. We have handled many disasters including locusts; floods, Ebola, landslides, Marburg, floating Islands and we are handling Coronavirus. I want to thank Ugandans for listening to our message,” he said.

The President pledged to send equipment to help clear debris and urged the leaders to sensitize the people and plant trees because without forests, we cant survive.

“My appeal and message is that lets work together on a long term settlement plan. Four rivers in a space of 60 miles is wealth. This means one river every ten miles. In Karamoja you go for miles without any river but here it’s a problem. This is an opportunity which is not well handled,” he said.

The Chief Administrative Officer who is also the Chairperson of the Kasese district disaster management Committee Mr. Muramira Aggrey Winston said there is an urgent need for relocation and ressettlemnt of all affected persons to safer places and the immediate take-over of the river valley areas by the Uganda Wildlife Authority of National Forest Authority. He also said there is need for immediate opening up of flood channels in Kasese Town which have been constructed on by individuals.

The meeting was attended by the Minister for Relief, Disaster Preparedness and Refugees Eng. Hillary Onek and his State Minister Musa Echweru, Uganda’s ambassador to China Dr. Crispus Kiyonga, religious and district leaders.

President Yoweri Museveni has said that it is...