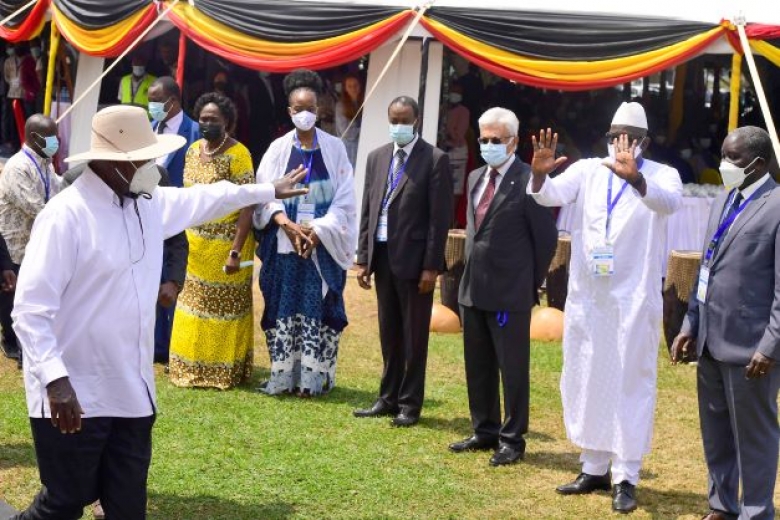 President Yoweri Kaguta Museveni has said Uganda is committed to ensuring sustainable use of the environment and the natural resources saying these are at the core of sustainable development and critical for social economic development and transformation, healthy ecosystems and human survival.

Officiating at the closure of the 3-day Inter-Ministerial Conference on Migration, Environment and Climate Change in Munyonyo, Kampala, H.E Museveni noted that the issues concerning migration, environment and climate change are not new to Uganda and people, majority of whom are vulnerable with limited capacity to adapt to the impacts of climate change, have continued to experience increased frequency and intensity of floods, drought and landslides associated with the impacts of climate change.

“In 2010, we had to relocate and resettle about 3, 000 people from Mt. Elgon sub region, Bududa district in Eastern Uganda to Kiryandongo district in Western Uganda after their homes were devastated by the landslides on March 1st 2010,” Museveni said.

According to President Museveni, Africa particularly is disproportionately susceptible to climate change impact, causing loss of lives and livelihoods from the damage caused by climate change- related disasters. He said East Africa and the Intergovernmental Authority on Development (IGAD) and other African countries rely heavily on natural resources that must be protected at all times.

He reaffirmed commitment of African countries to the realization of the 2030 agenda for sustainable development and Africa agenda 2063, saying climate change adaptation is key in addressing the impact of climate change at all levels including addressing loss and damage and increasing the resilience of communities, infrastructure and eco systems.

“No country can address the challenge of climate change alone. We must work together to increase adaptive capacities while minimizing the negative impact of climate-related displacement and involuntary migration,” he further noted.

President Museveni rallied delegates to protect wetlands and plant more trees in their respective countries as a measure to cushion against environmental catastrophes.

He added that wetlands, forests and open water bodies in Uganda contribute 40 per cent of the rain the country receives, while 60 percent of the rain comes from oceans. He said parts of West Nile in Uganda are getting more rains partly due the wetlands in South Sudan and the forests in Congo.

“Therefore, by interfering with the forests and wetlands, we ourselves are destroying 40% of the rainfall of these areas. So, the countries of the great lakes, you really need to watch out! In Uganda here, I’m having war to make sure that nobody cultivates in the wetland."

The President again advised farmers to stop growing rice in swamps since the economic activity causes a negative impact on the environment.

“Swamps are tributaries of the river Nile. So, when you grow rice in the swamps, you’re committing a very big crime. And this is us, not the Europeans. This must stop!” Museveni warned.

H.E Salva Kiir Mayardit, the President of South Sudan who also addressed the conference, spoke highly of measures on climate adaptation and called upon countries to devote more resources towards climate change financing.

He said the Government of South Sudan has submitted its national adaptation plan to the UN framework convention on climate change.

The three-day Regional Inter-Ministerial Conference on Migration, Environment and Climate Change sought to raise awareness about the impact of climate change and environmental degradation on human mobility, ahead of the 27th session of the UN Climate Change Conference of the Parties (COP27) that will take place in Egypt from November 7-18.

The conference held under the theme:  "Enhancing Cooperation in Relation to Climate Change Induced Human Mobility, Including Migration, Displacement and Planned Relocation" was also addressed by the Executive Secretary of IGAD, H.E. Eng. Mahboub Maalim, the Deputy Executive Secretary of the United Nations Framework Convention on Climate Change (UNFCCC), Mr Ovais Sarmad and the Egyptian Ambassador to Uganda, H.E Ashraf Mohamed Nabhan, among others.

The conference also saw Heads of Ministerial Delegations signing and adopting the Kampala Declaration on Migration, Environment and Climate Change, an important step to dealing with and responding to the impact of climate on migration, displacement and human mobility.

It attracted high-level representatives from countries including Burundi, Djibouti, Democratic Republic of Congo (DRC), Egypt, Eritrea, Ethiopia, Kenya and Rwanda. Others were Senegal, Somalia, South Sudan, Sudan and the United Republic of Tanzania.

The East and Horn of Africa is one of the most vulnerable regions to climate variability and climate change. The region regularly faces a wide range of natural hazards and slow-onset events and