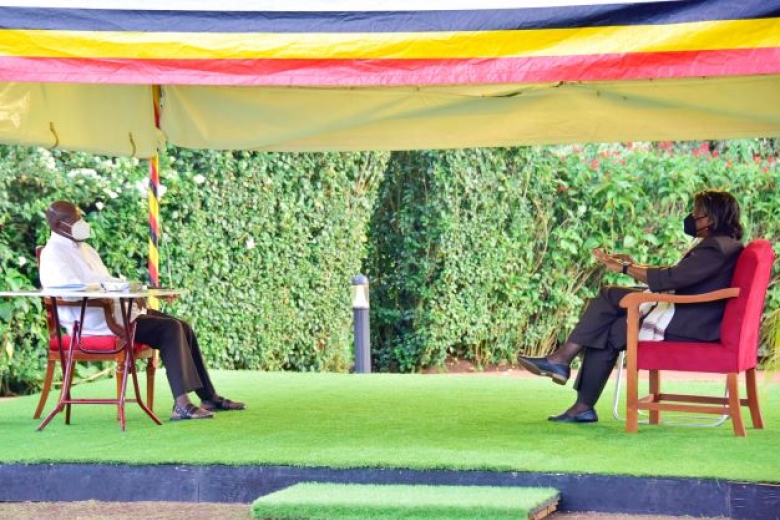 President Yoweri Museveni has this evening received the US Ambassador to the United Nations, H. E Linda Thomas-Greenfield, who called on him at State House, Entebbe.

Amb. Greenfield, who is on an African tour of three African countries, started her visit in Uganda today where she held fruitful discussions with her host, President Museveni, on regional and security matters.

The envoy expressed her delight to be in Uganda, a country she said has a long and deep friendship with the USA.

She extended warm greetings from President Biden to President Museveni whom she acknowledged as a pillar of stability in the region.

“We acknowledge Uganda’s peace mission in Somalia. Your mission has made a difference,” she noted.

On the issue of food security in the country, President Museveni informed his guest that food is available in Uganda, noting, however, that the high cost of fuel affects the transportation of food to the markets, thus driving prices up.

“The problem here is fuel. When fuel prices went up food prices also went up. But we have food like bananas, cassava, millet and sweet potatoes. Although we had a drought, we still have plenty of food,” President Museveni assured the envoy.

The President, therefore, appealed to the US to consider separating African countries including Uganda from the sanctions because the high cost of fuel is affecting the prices of commodities due to high transport charges.

On regional security, President Museveni told his guest that Uganda’s position is that cases of insecurity can easily be solved through dialogue by all parties involved especially where there is willingness to talk.

“Talking with adversaries is not a sign of weakness but an opportunity for soft landing and saving resources of time, life and dignity,” he pointed out.

Amb. Greenfield was accompanied by the US Ambassador to Uganda, H.E Natalie Brown, the Assistant Secretary of State for African Affairs, Molly Phee and the African Advisor, Judd Deveron, among others.

She will proceed to Ghana and Cape Verde after her visit to Uganda.