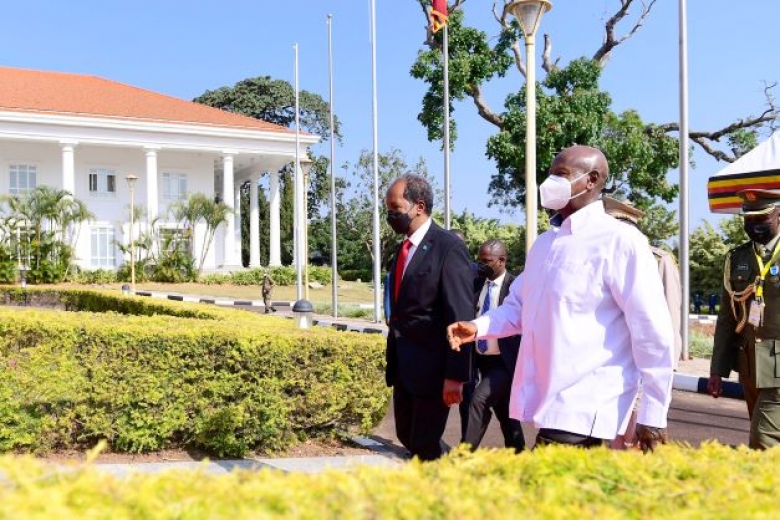 President Hassan Sheikh Mohamud of the Federal Republic of Somalia arrived in Uganda this afternoon for a three-day official visit at the invitation of his counterpart President Yoweri Museveni.

The Somali Head of State was accorded a 21-gun salute. He also inspected a guard of honour mounted by the Uganda People’s Defence forces.

Speaking shortly after bilateral talks between the two leaders, President Museveni hailed President Mohamud & the entire government of Somalia for demystifying the lies of the Al-shabaab terrorist group and for tirelessly working to totally isolate and decisively defeat them in order to ensure total peace for Somalia.

President Museveni further said that Somalia needed to heed leadership lessons from the old political movements like the National Resistance Movement which inherited a failed and divided state that had similar challenges of tribalism and all forms of sectarianism but because of the strong emphasis of patriotism and Pan-Africanism the leadership managed to unite the country and put it the right path of development.

“Uniting and developing a country calls for a correct ideology, that’s how we managed to develop the UPDF. When we send them for missions like in Somalia they see it as their duty to protect their African brothers in the true spirit of pan-Africanism” President Museveni noted.

President Museveni further said that the people of Somalia needed to volunteer and defend their country from the terrorist groups in a sprit of patriotism. He particularly noted the need to have a well-empowered Somali youth especially the student movement to take it upon themselves to defend their country militarily but also ideologically

He said that he would support the application of Somalia to join the East African community since the country fulfils all the requirements to join the block.

President Hassan Sheikh Mohamud on his part greatly commended Uganda for helping his country to fight terrorism noting that terrorism in Somalia was not only about Somalia but global terrorism.

He added that his government was fighting Al-Shabaab terrorism on three fronts that include the ideological, religious and economic one so as to cripple them and end terrorism. He said that the approach was teach the Somali people especially the youth that “Somali belongs to Somalis not terrorist”

He called for continued cooperation between Uganda and Somalia in areas of trade and investment, defence especially as they continue to build Somali army as well as tourism among others.

The two leaders agreed to deepen cooperation further and welcomed the signing of the memorandum of understanding between the two countries in areas diplomatic and political consultation, Defence and trade cooperation.