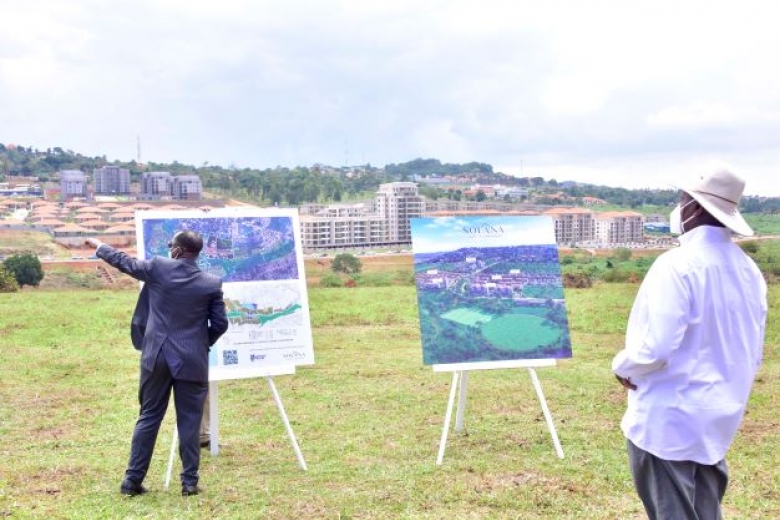 President Yoweri Museveni has commissioned a 72-million-dollar SOLANA lifestyle and Residences housing estate built by the National Social Security Fund and used the occasion to appeal to all Ugandans to understand the importance of raising joint and collective capital which he said was the only way society can finance and undertake big projects.

The SOLANA housing project is located in Lubowa in Wakiso district. The 72 million housing project which is the first phase of the 10year housing project that will be on 600 acres when completed, has 300 houses on 60 acres of land. The housing units include bungalows, apartments and villas.

The President said Ugandans need to grow the culture of growing joint capital and be able to do big ventures. The National Social Security fund has been able to undertake big projects country wide overtime because of the collective savings of the Ugandan workers.

“Collective saving is important, that's how capitalists developed their countries by floating shares and raising capital to do big investments and ventures that they could not do individually the President said.

President Museveni further said that because of the need to raise joint capital in the country the National Resistance Movement government has always promoted and encouraged the formation of Saving and Created Societies (SACCOS) country wide so that Ugandans can be able to raise capital jointly and do big ventures together without necessarily going to banks for loans that are very expensive.

The President saluted the Board and Management of the National Social Security fund for investing wisely and contributing to solving the housing shortage in the country. He said that the government will look into the reported value added tax levied on residential houses that are not commercial as well as finding means of boosting availability of mortgages to Ugandans.