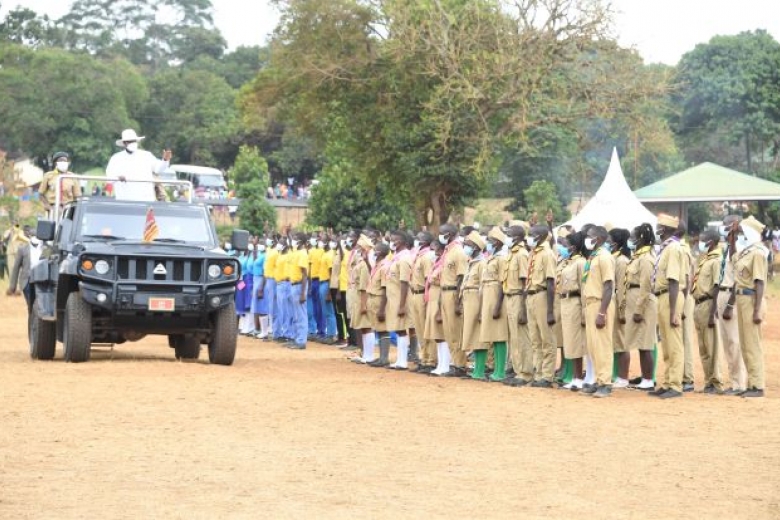 The government will soon share strategies for the restoration of the environment and natural resources following a spell of global climate challenges.

The announcement was made Wednesday by President Museveni during the closing ceremony of the National Scouts Camp that started on August 12th at the scouts’ home in Kaazi, Wakiso District.

At least 2873 scouts attended the 5 days camp, which recorded the youngest scout, a 17months old Ssanyu Davina from Kamuli District. 39 of the scouts were awarded a wood badge which is the equivalent of the degree level.

President Museveni, also the patron of the Uganda Scouts Association, tasked the scouts to contextualize the issues of the people and seek ways to help.

Among the issues, the President pointed out the climate and environmental challenges as well as self-inflicted poverty emanating from the inadequate application of the abundant African resources by our people.

He said that the scouts fit the role of preaching such a gospel because their duties encompass character and attitude formation.

“Scouting movement should teach our people to go from working for the stomach to food security and income using the resources they have. We should also involve the issue of environment,” he added, pointing to the different global challenges including the prolonged heat wave in Europe and the dry spell in Uganda that culminated in famine in isolated parts of the country.

He used the same opportunity to announce that the government has made plans to restore the environment in an effort to achieve food security.

“Government will come up with a plan to fully restore our environment here. Once we are done, you will see the environment,” he said.

In a speech read by the State Minister of Primary Education Moriku Kaducu, the Minister of Education & Sports Hon Janet Kataha Museveni said the scout’s movement has distinguished itself worldwide as a time tried and tested effort which equips boys and girls to be responsible and productive citizens for this country.

“I commend you for this significant effort of moulding the younger generation to always have optimistic mindsets in the face of diversity, seek opportunities for personal development and draw futuristic lessons in every situation,” she said.

Speaking at the same event, the Scouts’ Commissioner and Minister for Works and Transport Gen Edward Katumba Wamala waxed lyrical about the nature of scouts training, maintaining that the formation starts at a younger age so that candidates benefit and become useful as well to their country.

“True to this year’s theme of embracing COVID-19 challenges for steady progress, I wish to inform you that we aim to train our scouts while they are still young such that they can easily embrace the future challenges without deviation,” Gen Katumba said quoting from a biblical source Proverbs 22:6

The Chief Scout and former Dr Maggie Kigozi thanked the president for his efforts in protecting the environment and also fighting for the retention of the scouts’ land which houses a forest.

Dr Kigozi said that by retaining the land at Kaazi “it has helped us conserve our forest here which is the nearest forest from the city.”

“We intend to use these well-conserved resources for tourism attraction, the forest is fresh and we have a bird-watching tower, monkeys, etc,” she said.

In his previous speech, President Museveni said that the overly-dependent on rainfall and the degraded ecosystem pose jeopardy to Uganda’s economy in the face of climate challenges.

Wetlands for instance have declined from 15% to 9% under 30 years while forest cover now stands at 9% as of 2015, down from 45% before independence. Government efforts previously have ensured that the forest cover climbs to 13%.

Notwithstanding, at least 4 million Ugandans live around wetlands and depend on them for food security.