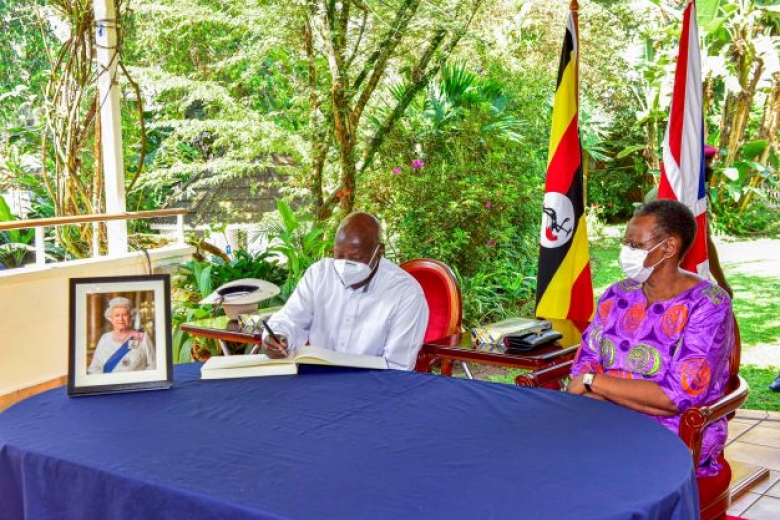 President Yoweri Kaguta Museveni together with the First Lady  and Minister of Education and Sports, Hon. Janet Kataha  Museveni, have this morning paid tribute to the late Queen of  England, H.M Queen Elizabeth II at the residence of the British  High Commissioner, H.E Kate Kate Airey.

Her reign of 70 years and 214 days was the longest of any British  monarch and the second longest recorded of any monarch of a  sovereign country.

In his message, President Museveni extended condolences and  sympathies on behalf of Ugandans to the Royal Family and the  British people.

“On behalf of the people of Uganda and on behalf of my family, I  again extend our most heart-felt condolences to His Majesty King  Charles III on the death of H.M Queen Elizabeth,” President  Museveni said.

The President said that the late Queen Elizabeth has for more than  70 years been not only the Head-Of-State of UK but also Head of  the Commonwealth.

“The metamorphosis that saw the British empire transform into  the Commonwealth of independent and equal states headed by Her Majesty and now His Majesty King Charles III was a  phenomenon,” he said in his message.

H. E Museveni said that the use of English language in all the  Commonwealth countries is an asset that should be maximally  used for the prosperity of the billions of Commonwealth citizens  through investment, trade, tourism and anti-terrorism.

“In my earlier message, I talked of her reconciliation efforts. She  has led us well. We salute her contribution. May her soul rest in  eternal peace!"

First Lady Janet thanked God for blessing the late Queen with  such a good and productive life.

“In turn, I salute the Queen for using all her life to selflessly serve  her homeland and the entire Commonwealth family. We in Uganda  will always remember her last visit to our country leading to the  2007 CHOGM. Those are good memories we will keep of Her. May  the Lord now give her a good and peaceful rest in eternity,” the  First Lady said.