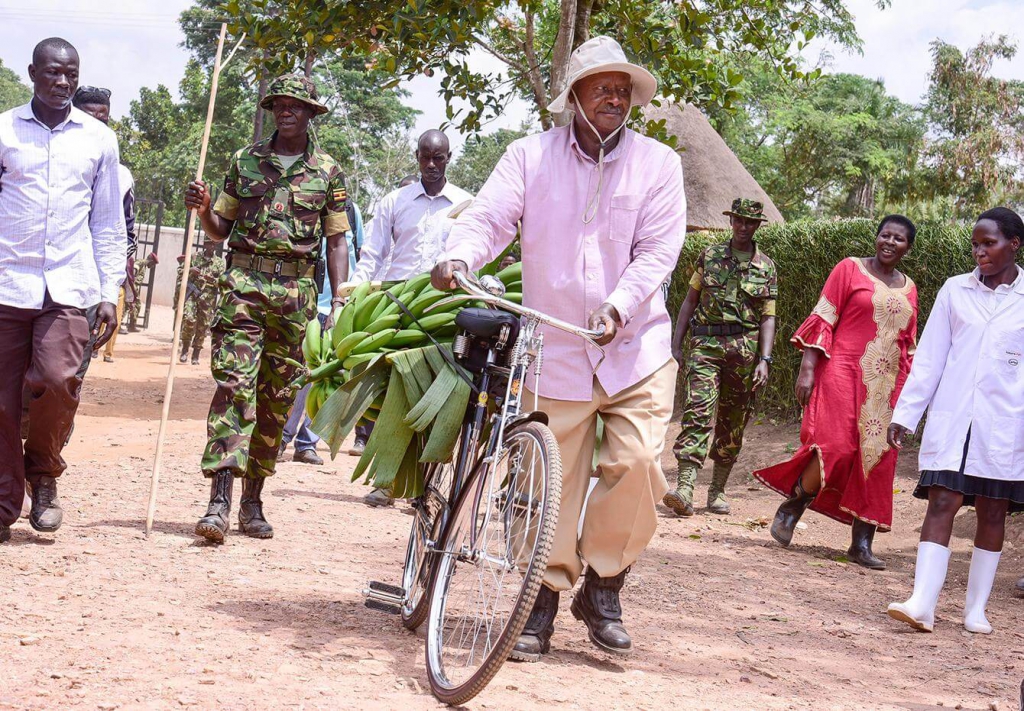 One of the things that the President has been fighting tirelessly is poverty. This is why he set up the Presidential Initiative on Poverty and Hunger. The Poverty Alleviation Department (PAD) in State House was established in 2000 as a clearing house for pledges made by President Yoweri Museveni.
In 2003, the department received a mandate to develop wealth creation models to benefit the people of Uganda. The department has thus far designed more than 12 initiatives aimed at increasing productivity and value addition. A model parish is an innovation evolved by the President to demonstrate how systematically a high concentration of projects in a model parish can be used to tackle poverty and speed up rural transformation. PAD works in tandem with other government anti-poverty initiatives.

To become a model parish, farmers were given better yielding seeds and farm implements for their farms. By July 2009, 12,400 banana suckers had been distributed to farmers. Since an acre requires around 400 suckers, these were able to cover over 26 acres of land. A farmer can harvest at least 100 bunches from an acre every month. In addition to this, Lwabenge also received 22 calf heifers distributed to 22 households. There were also two bulls in the parish, purposely to cater for the calves. These cows produce at least 10 to 14 liters of milk per day. Resident farmers formed SACCOS, and are now able to market their produce.

In the Ntungamo district, Kikoni was selected as the model parish. As of July 2009, the parish had received banana suckers, goats, cows, hives for apiary and many other income enhancing implements. A total of 2,589 pullets and 249 cocks had been distributed. Chicken beneficiaries were given between 50 and 200 chickens, depending on capacity. Improvements made in Banana production have drastically improved food security in the parish. An additional benefit of the increased earnings of the farms is that the houses in most of the model parishes have been upgraded, each being equipped with proper plumbing. The installation of quality stoves has also lessened the demand for firewood.

SUCCESS STORY
Another example of a selected model parish is Ruhaaro in Bushenyi. Ruharo was among the very first model parishes, started in 2004. When a team of researchers from the Office of the President visited the parish in 2009, they realized that some of the programs were not going according to plan. The team observed that some of the inputs were not doing well. For example, they noticed that although some of the families catered for the bananas, others did not do so, leading to poor productivity. They also discovered that in comparison to the cattle in some other model parishes, those in Ruharo were not producing as much milk.

In the Busoga region, one of the selected model parishes is Mbulamuti in the Kamuli district. As in the other model parishes, most of the population in this region relies on agricultural produce. When a team of researchers from the President’s Office visited the area on a fact-finding tour, they realized that many of the residents had not yet adapted to the idea. The team was informed that out of the 1,000 households in the parish, only 24 had benefited from the program. The encouraging news however, was that those who had benefited were doing well. By July 2009, 84 goats had been distributed to the residents and all of them were doing well.

Residents received over 400 coffee seedlings, 3,000 banana suckers, 2,500 fish fingerlings, chickens and various other implements. Overall, according to the researchers’ observations, food security was not great either and needed to improve. While Mbulamuti and Ruharo were not performing well, this was not the case with Mangho parish in Mbale district. As of July 2009, the parish had received 20 heifers and each of them was producing an average 12 liters of milk per day. Local chickens given to various families were also doing well, while the bananas had also flourished and one of the benefiting farmers was already earning sh500,000 per month from bananas production alone. Overall, the idea of model villages is changing lives across the country.